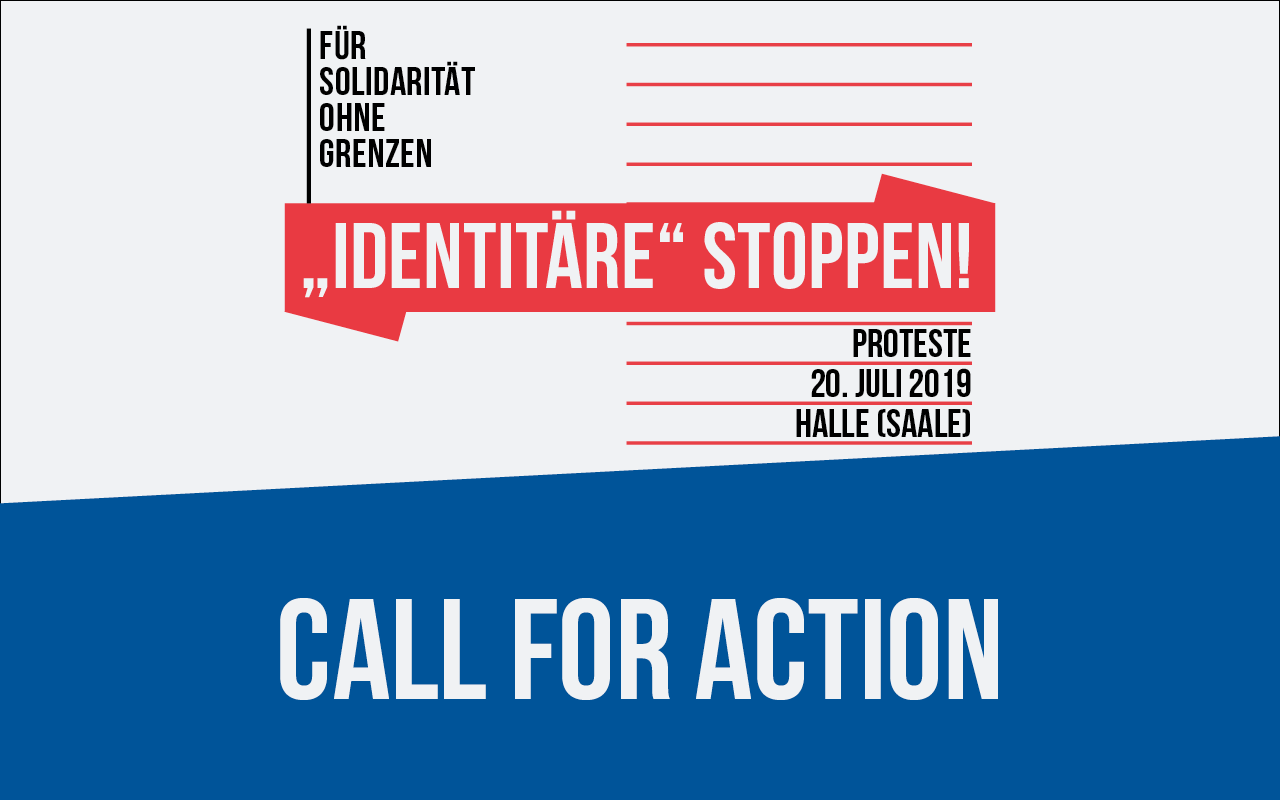 Stop the Identitarians! – A Call to Action

The “Identitarian Movement” is planning a march on July 20, 2019 in Halle (Saale), Germany. Halle gegen Rechts – Bündnis für Zivilcourage(Halle against the Right – A Confederation for Civil Courage)is calling for a counter-protest under the motto “Stop the Identitarians! For Solidarity without Borders.”

The “Identitäre Bewegung” (Identitarian Movement) will be marching in Halle (Saale), Germany on July 20, 2019. They will be mobilizing members from across the country and beyond in the city where they opened a far right social center in 2017 at Adam Kuckhoff Straße16. The center was intended to be a beacon for the “new right.” Since then, however, city residents, antifascist groups, resolutions, and protests have ensured that the far right regards its project as a failure. Yet the social center remains open and their planned demonstration under the motto “Defend Europe! It Is Our Homeland” is clearly intended as a provocation. They do not want to give up in Halle and they want this demonstration to be a (much needed) victory – a signal far beyond the city and the day of the event.

The “identitarians” present themselves as young and academic, just as the “new right” overall attempts to conceal its anti-democratic, anti-Semitic, ethno-nationalist, and fascist connections. At the same time, they also refer to authors who are considered antecedents to National Socialism (i.e., Nazism). They are part of an extreme right-wing network made of up the far right party Alternative for Germany (AfD), right wing media, and training grounds like Götz Kubitschek’s “Institut für Staatspolitik,” located not far from Halle. The “identitarians” have resorted to violence since their very first public appearance in Halle. Their flags have been seen at racist marches like the ones in Charlottesville, Virginia, and they are also active in France and Austria. Their ideological and personal connections extend all the way to right wing terrorism: the Christchurch, New Zealand killer referred to “new right” texts in his manifesto and he donated to leading “identiarian” figure Martin Sellner. His killing spree was an implementation of new right ideology. In 2017, “identitarians” chartered the ship C-Star and, through the PR actions that followed, attempted to criminalize and obstruct the work of sea rescuers on the Mediterranean.

Europe’s Walls Will Fall / On Anemones and Coral (Tocotronic)

The extreme right and its continuous escalation have had a significant impact on the politics of European states and societies, all the way up to their governments. Isolationism, intensification of the European border regime, and the dismantling of basic rights for refugees are also products of debates driven by the right. At the same time, thousands of people have become involved in the Seebrücke(“Sea Bridge”) movement and hundreds of thousands have taken to the streets to join Unteilbar(“Indivisible”) demonstrations for universal human rights and a society in which the dignity and rights of each and every individual matter. These social and political struggles for safer escape routes, for asylum without borders, for another Europe, and for solidarity are civil society’s counterproposals to the extreme right’s “fortress Europe.”

Stop the “Identitarians!” For Solidarity without Borders!

We are calling for the “identitarians” to be stopped and for solidarity without borders on the streets! To achieve that, we are allying with people who are fighting in many places in Germany and across Europe to end isolationism and death on the Mediterranean. With a diversity of tactics and solidarity with one another, we will nonviolently and resolutely protest. With a clear outlook, creative approaches, and civil disobedience, we will connect with successful protests and blockades of the past. On July 20, 2019, let’s stop the “identitarians” and make solidarity without borders the message of the day!